The Sofia Business Tower project is located in the most developed and preferable business area of Sofia, between boulevards Tsarigradsko Shose and Brussels. The site is right next to one of the most visited malls in the city, The Mall, hotel Novotel Sofia, and the business building Mega Park and the European Trade Center. Large Bulgarian and international companies, such as Strabag, Huawei, FOX International Chanels, LG, Max Telecom, Deichman, GSK, Bulsatcom, Vivacom, Samsung, Carrefour, DM and many others have offices there.
Brussels Boulevard provides access to Sofia International Airport, which is only 4 km away from the site.
Tsarigradsko Shose Boulevard connects the center of Sofia with the Trakiya Motorway, and also provides access to several densely populated residential districts.
The routes of 15 buses and trolleybuses pass in close proximity to the site, and the Sofia metro is only one bus-stop away. There are plans for the future expansion of the third line of the Sofia metro next to the area of the project. 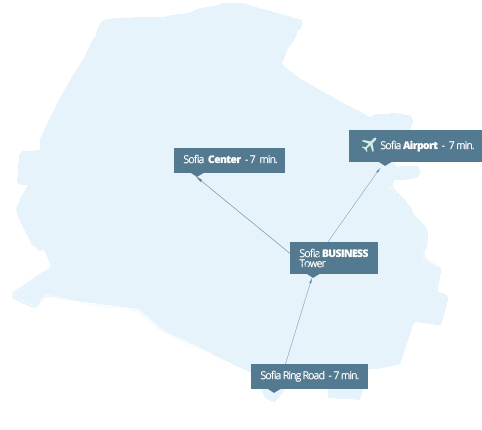